« Back to The Bradwell Bugle « Older Entry | Newer Entry »

Vere is one of the few remaining Dunkirk Little Ships. Of the 8-900 who went to Dunkirk to rescue British and allied troops in 1940. Only about 120 survive, and of those approximately 80 are seaworthy. So greatly respected are these that the DLS contingent was given pride of place on the Thames Jubilee pageant in June, immediately following the Royal Barge. But Vere was not with  them.

She is presently undergoing a complete restoration in Cowes, after twice narrowly escaping the breakers yard in 2005 and 2006. When completed, the intention is that, by 2015, the 75th Anniversary of Dunkirk, she will be established as a mobile educational memorial to Dunkirk, touring the South coast ports and the Rivers Thames and Medway to tell primary aged school children the amazing story of the miracle of Dunkirk in 1940. 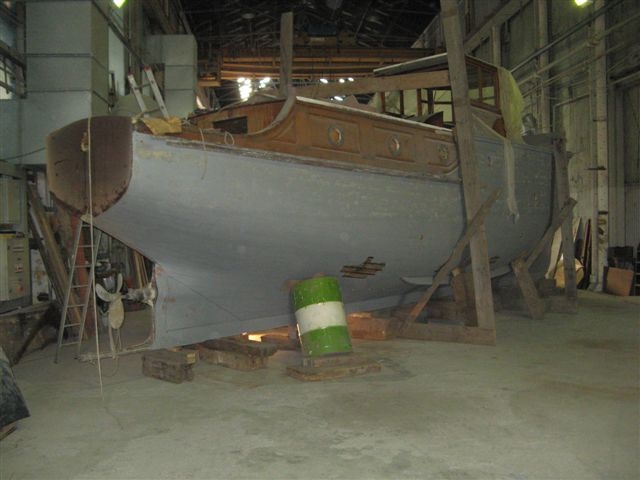 In planning the Dunkirk rescue, the authorities hoped to recue about 45,000 of the stranded troops, but the final total was in the region of 338,000. Shipping from Destroyers to Little Ships, some even smaller than Vere which is 40ft long, worked together to bring the Allied forces home to the South coast, the smaller boats ferrying troops to the deep sea ships which could not approach the shore. Vere is credited with the rescue of 348 troops.

So what is Vere’s link to Bradwell-on-Sea?

During her restoration, researches into her history have revealed a fascinating story. She was built for the Admiralty in 1905 as an admiral’s barge, we think on the Dreadnought. In 1923/4 she was sold out of service and converted into a handsome “Gentleman’s Yacht”. Eventually in 1936, she came into the hands of William Charles Gatward Metcalfe who berthed her at Bradwell-on-Sea.

Early in WW2, in August 1939, Vere was requisitioned by the Admiralty for “ARP” (Air Raid Protection?) duties. We think, partly because of her location, that she may have been part of the small Mine Hunting Flotilla searching for the mines dropped in the Thames Estuary which had devastated shipping heading for the Port of London. By the autumn of 1939, the Estuary was virtually closed to shipping and the nation was threatened with starvation within weeks. The authorities were desperate to retrieve one of these mines to discover what activated them and were seeking them by air and sea forces. One was found in November 1939, dropped by German aircraft into the mud near Shoeburyness and, once it was established that the activation was magnetic, steps were taken to combat this very real threat. That is a story in itself and no doubt well known in the area.

Vere was decommissioned in March 1940 but somehow found herself involved in the Dunkirk rescue later that year between 27 May and 5 June. Little is known in detail but we are sure that William Metcalfe himself took her to Dunkirk and she has the bullets in her to prove it! Most of the little ships were captained by Navy personnel, but William Metcalfe, an ex Royal Marine, with, if our conclusions are correct, recent mine-hunting experience, was one of the few owners allowed to go with their boats on this perilous mission.

Members of the Metcalfe family have been traced and are keen to help with the search for more information. It is believed that there are family links with Clacton but we are also looking for more about Vere at Bradwell-on-Sea, and what the harbour area looked like in 1940.

So if any readers can help us with information or photographs of the area in 1940, the Mine Hunting Flotilla or the Metcalfe family please contact us on [email protected] or through this Newspaper.

Hon Archivist to the Vere Project

Oops, you forgot something.

The words you entered did not match the given text. Please try again.

Reply Emeffitiotrot
6:17 PM on February 21, 2013
Normally, a wedding event is a happy celebration. Nonetheless, for many people, it can be a stress filled one particular. The easiest way that you can prevent a wedding from getting stressful is as simple as becoming furnished with crucial wedding event recommendations. In this post, you might be furnished with vital techniques for using a fantasy wedding without the stress.

Maintain your toasts quick and to the point. Lengthy, rambling accounts concerning this time you were in college and continued an extended streets trip jointly start off cute but result in yawns whenever they get too long. When you have an interesting scenario to talk about, make sure that it is lower than 3 minutes very long.

For women-to-be, load a attractiveness urgent kit and provide it in your maid of recognition to carry to. Using this method, if your makeup products smear or maybe your your hair slip unnatural, you might be well prepared. Within this package, incorporate your makeup, a clean, hairspray, and extra hairpins, should you drop a single.

Check with your wedding event friends to RSVP to the big day every time they possibly can. Understand that some individuals might need to wait to make sure they could get time away from job, but it's crucial to get a brain add up as early as possible to learn just how much to enjoy on food items and also other organizing.

Provided you can pay for a single, a marriage coordinator can be quite a huge some time and pressure saver. Not only can a planner coordinate your wedding day and work together with one to create your vision possible, but she can even be an excellent source of information for ideas and opinions. She could help you save from working with each and every very little minimal detail and allow you to center on high-levels preparation and having the ability to enjoy the method.

Try not to assume the wedding to get ideal. Do your very best so it will be the best it might be just before the real day, but on your wedding event just permit go and allow points occur because they arrive. Using this method it is possible to enjoy the day as an alternative to having to worry concerning the fine details.

Program early on if you'd enjoy having a spot wedding ceremony. You have to guide considerably upfront to ensure all of the areas you'll should lease, from rooms in hotels to ceremony to wedding reception, is going to be offered during the time you want to make use of them. You must also look at leasing autos before hand, in the event that.

Creating the determination to get along with a single person throughout your lifestyle is certainly a severe package, and consequently your wedding should be treated with the upmost value with quite near focus paid out to every fine detail. Use a number of the advice on this page to make certain that the wedding is almost everything it can be.

Start a Free Blog at Webs.com